This event proved monumental in Kainen’s conceptual and artistic development. He sought out other avant-garde artists in the city, especially those who shared his institutional contempt. He began to engage with the emotive palette and gestures of German expressionism and the social awareness and ferocity of Social Realism during the 1930s. Kainen also frequented cafeterias that had become the places where urban artists met to debate and develop ideas, both social and aesthetic. In the early 1930s, Kainen formed close friendships with the early abstractionists, including John Graham, Stuart Davis and Arshile Gorky, who painted his portrait and became his mentor. Kainen’s influences from the New York School and his admiration for the great expressionist artists remained a constant throughout his life.

An artist is working in a rectangle and everything he has seen and heard is part of his point of view…. Gorky gave me advice: "Above all, trust your unconscious." When I was 24. I didn’t quite understand what he meant. I had a very uninteresting unconscious at 24. — Jacob Kainen

From 1935 to 1942, Kainen worked for the Graphic Arts Division of the Works Progress Administration’s (WPA) Federal Arts Project, a New Deal program that employed artists. He was able to learn lithography, etching, woodcut, silkscreen, and other media as part of this project while saving his personal time for painting. He soon began to enjoy printmaking as his skills and confidence increased and he found he could bring his painting skills to bear on the medium by working freely, expressively, and seeking new means of introducing textures and tones. As with his paintings, his subject matter was the city’s people and places, based on his observations of the realities of the Depression. He learned color printing, and two of his finest prints, Banana Man (1938) and Snowfall (1939) are complex experiments that would have been beyond him at the beginning of the project.

Painting is one thing, but to be able to make prints is another. Because you have this graphic sense, a sense of black, white and gray and the calligraphic or tonal sense. That’s why it’s so attractive to painters, to artists…. a woodcut or a lithograph, an etching or a silkscreen has a physical property that is distinct from all others. — Jacob Kainen

©2013 The Estate of Jacob Kainen. All Rights Reserved. 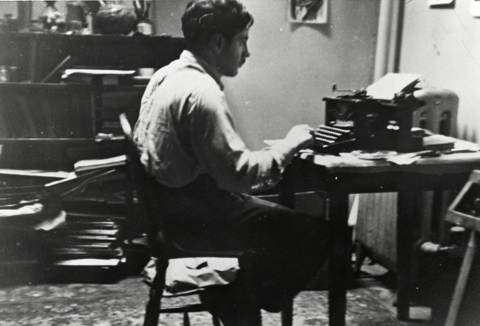 It was during this time that Kainen joined the Artists' Union and became a contributor to, and later editor of, its journal, Art Front, and an occasional cartoonist and reviewer for The Daily Worker. He also signed legal petitions to institute social change. These activities would come back to haunt him years later.