Born on December 7, 1909, in Waterbury, Connecticut, Kainen was the second of three sons of Russian immigrants. His father Joseph was a tool-and-die maker and an inventor, whose inventions included the "Dead Man's Brake," which shuts down a train in case of emergency (family lore says the patent was stolen from him). He was a mechanical whiz who owned his own watch company at one point and occasionally sculpted. Kainen’s mother Fannie (née Levine) had no formal education, but had a great appreciation for music, art and literature and was known for her good taste. Both parents encouraged their boys ⎯ Jacob, Abe, and Eddie ⎯ in their artistic and academic pursuits.

When the family moved to the Bronx in 1918, Kainen’s budding passion for art and literature was fueled by trips to the Metropolitan Museum of Art, where his mother would pick out paintings for him to copy as gifts, and the New York Public Library. In addition to exercising his natural artistic skills, he became a prodigious reader and showed a gift for memorizing poetry by the time he was in the sixth grade.

After graduating from DeWitt Clinton High School at sixteen, Kainen took drawing classes at the Art Students League, where Kimon Nicolaides taught him to respect artistic discipline and to trust in the freedom and sureness of his hand. Kainen later said that the Nicolaides classes were the best training he ever had. It was during this time that Kainen made his first prints by pulling drypoints on zinc plates through the ringer of his mother’s washing machine. 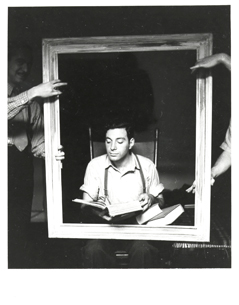 At the same time, Kainen indulged his love for literature by working in the classics department of Brentano’s bookstore and developed his skills as a boxer, prompted years earlier as he fought off neighborhood bullies. These experiences served him well as he went on to become an expert in the classics and a skilled amateur prizefighter.

Kainen was admitted to the Pratt Art Institute in 1927. After several years of art training and constant work on his own, Kainen was far more advanced and ambitious than most of his fellow students and knew more than some of his teachers. While he had a deep appreciation for the old masters, he quickly found the curriculum backward, anti-modernist, and rigid. In Kainen’s final year at Pratt,

the fine arts curriculum was revamped as a commercial art program, and Kainen was outraged. He rebelled by refusing to take commercial courses and set up his own class. He was expelled three weeks before graduation. (He would finally receive his diploma from Pratt twelve years later.)